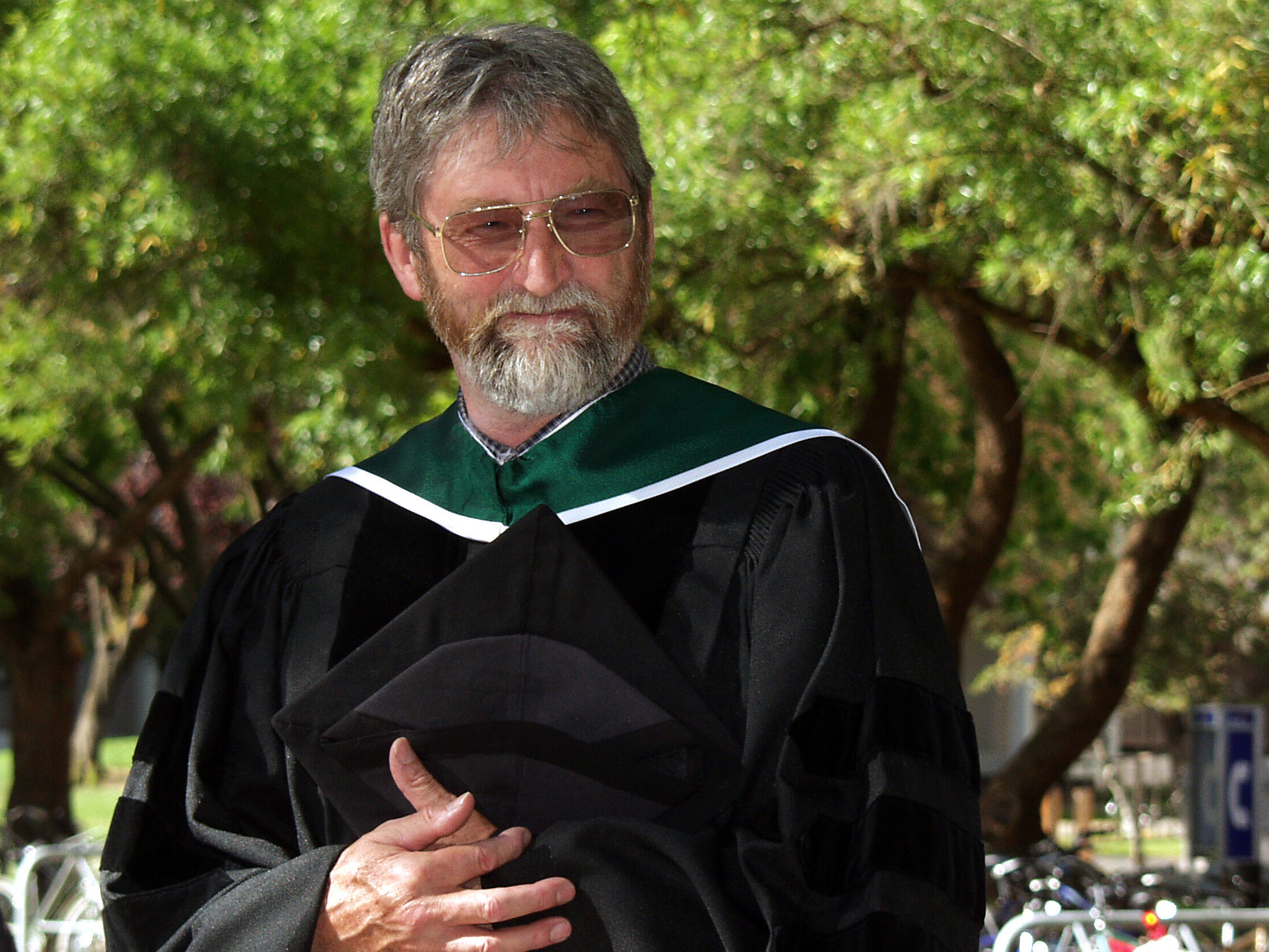 Our colleague and dear friend, Senior Lecturer Emeritus Richard Cowen, passed away on January 8, 2020. A gentleman and a scholar, Richard's teaching excellence inspired thousands of students, as well as UC Davis Earth and Planetary Sciences faculty and staff.

A gentleman and a scholar.
With boundless enthusiasm.
Kind, positive, and supportive colleague.
Relentlessly upbeat.

Whenever Richard’s name is mentioned, these phrases are offered without hesitation, and with a smile. And now they are spoken with a sad smile, as we lost a truly wonderful human being earlier this month. Richard was a unique person, and a unique paleontologist. His distinctive perspective on the form and function of any organism, dead or alive, provided an uncommon approach to paleontology and along with it, produced many fresh insights. Richard made his particular mark on the field and we are all the richer for it. Several of his many excellent studies stand out as characteristic examples of his clever and skillful interpretation of biological function from morphological pattern.

A scientific role model.
Richard completed his Ph.D. on brachiopod paleobiology in 1966 at Cambridge University, working with Martin Rudwick, one of the finest paleontologists and historians of science. One of Richard’s earliest publications was on the distribution of punctae in brachiopod shells – punctae are very small perforations in the shells, whose function to a living brachiopod was (and in many ways, still is) a great mystery. Richard tested another paleontologist’s geometric hypothesis to explain their two-dimensional distribution, rejected it with logic supported by data, and proposed a different hypothesis to explain the distribution from a functional perspective, rather than a strictly geometric perspective. He was a tester of hypotheses of form and function at a time when such an approach was not widely adopted in paleontology, and for this reason he became a scientific role model and an inspiration to a great many future paleontologists (including us).

One of Richard’s more creative yet persuasive studies involved bizarre Permian brachiopods. Drawing parallels with giant clams, he proposed that these brachiopods harbored photosynthesizing single-celled organisms in their tissues, making these animals primary producers as well as plankton-feeders.

Inquisitive mind.
Richard’s early papers were on brachiopod paleobiology, but his inquisitive mind soon led him to pursue a broad range of questions in functional morphology pertaining to other groups of organisms. A decade later, he published (initially with J. Kelley and later with W. Stockton) pioneering and influential papers on the nature of vision in the eyes of a certain type of trilobite. They proposed that the shape of each eye, arrangement of vertical files of lenses on the eye surface, and the neural network that likely enervated the eyes enabled these trilobites to see with stereoscopic vision over a narrow horizontal field an entire 360 degrees in scope. This remarkable type of vision in an extinct group of arthropods most likely had considerable adaptive value in perceiving and thus avoiding potential predators in shallow marine ecosystems. Creatively and cleverly integrating form with function led them to recognize and explain a visual system unique among arthropods, and raised a host of further questions to be investigated about the evolution of vision in invertebrate animals: why did such a remarkable visual system become extinct, and why did it not evolve multiple times independently? This classic research study is still being taught as a case study of evolution and adaptation in many paleobiology classrooms today.

Extending his comparison of morphological patterns and biological processes, Richard next turned his attention to crinoid echinoderm arms and harvesting roads on banana plantations. He reasoned that the functional problems faced by crinoids – stalked echinoderms with multiple, branching arms used for feeding -- and banana plantation managers were analogous: harvesting a micro-particular resource efficiently from a region and delivering the resource to a central processing point. He used this analogy to then offer an evaluation of the adaptationist program – that more thorough cost-benefit analyses of a form or system must be carried out before concluding that it must be “ideal” for performing a particular function.

Later in his career, Richard turned his attention more fully to vertebrates, and their morphology and function. Along with Jere Lipps, Richard proposed that plumage in birds could from the beginning have served a function of sexual selection, where colors and patterns in the feathers signaled an individual’s identity to potential mates or rivals. This idea is now widely accepted, but when it was proposed in 1982, it struck many as outlandish. Yet, as in so much else, Richard had a keen insight into how animals work.

Distinguished Teaching.
While acknowledging his innovative paleontological research, Richard’s real super-power was teaching. Richard received a Distinguished Teaching Award at Davis in 1993; an extremely well-deserved award that he seemed to take particular pride in. Richard invariably made each and every lecture he gave informative and creative and innovative and witty. He had a true gift for conveying information effectively to a broad range of people, all the while engaging and entertaining them. 1976 marked the publication of the first History of Life – a textbook Richard wrote based on his hugely popular lower division course of the same name. The sixth edition of this widely used textbook – a “market-leading introduction to paleontology” -- has been revised and edited by Michael Benton (in 2019) and is now entitled Cowen’s History of Life, a fitting tribute to the energy and enthusiasm that Richard had put into the book for more than 40 years.

After retirement, Richard continued to read voraciously and he commented on the paleontological literature regularly – his webpages on Geology in the News, Paleontology in the News, and Oceanography in the News were all kept up to date at all times. He was truly interested, deeply, in what others thought about paleontological issues – no matter how “far out” some ideas might have seemed to him. He could be a fierce critic but was always fair and well-reasoned, and his insatiable curiosity never seemed to waver.

Richard Cowen was greatly admired and appreciated and will be greatly missed.
Thank you, Richard, for gracing us with your intelligence, wit, and humanity.

Messages of sympathy and memories of Richard may be sent to memories-of-richard@ucdavis.edu.
If you wish to have your message included on this webpage, please let us know.